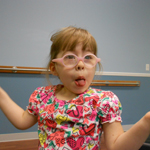 McKenzie has been going to K.I.M. since she was less than a year old for PT and I honestly feel as though she’s done so well because of it. I did not feel she was receiving enough PT through school so we’ve continued. It was a no brainer to sign her up for speech for the summer and even though it was only a short time, I really think it helped keep her from sliding back. She loves going to K.I.M. and gets SO excited to see everyone.